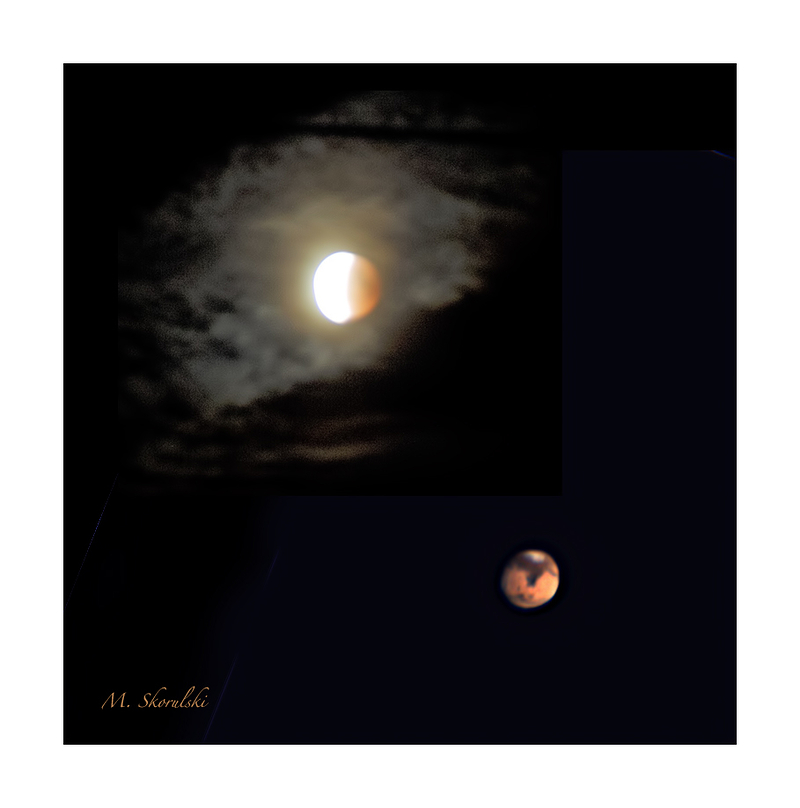 Posted by Michael Skorulski (Toronto, Canada) on 29 July 2018 in Plant & Nature and Portfolio.

Here is my image of the eclipsed moon of July 27 and the planet, Mars. Mars is at its nearest point to the earth right now since 2003. It is 57.6 million km. away. Its farthest point from the earth is 401 million km. In this image of Mars, a polar ice cap is clearly visible. The dark markings are areas where the lighter material has been blown away by the wind exposing darker rock underneath.This image is a compilation of two images which were not taken at the same time. The image of Mars was taken with a 9.5 inch telescope.

wauw you were lucky we couldn't see anything ( too cloudy )
excellent

superb.
Everyone could not see it, sometimes because of the clouds present.

Yes ! Mars as big as the moon!
They were right:-))
Nice composition.

@Jean-Luc.M: Thank you, Jean-Luc. Mars would be an orange speck of light if taken at the same time as the moon. This is a compilation. The Mars image was taken with a 9.5 inch telescope.

Wow, you captured the polar ice cap !! Your telescope is the REAL thing !!

WOW! This is spectacular!

wow...a great shot !!! Lovely that you could get the Mars. After a long time you are posting an astronomy related image !!
They say that tomorrow and the day after too, Mars's effect can be seen !
Aw!! I was fast asleep ;((((

@Devi: So was I. My family woke me up to get the moon image. Mars looks particularly bright right now. Thanks, Devi.

Spectacular. What a beautiful shot. Lovely. :)

A genius and spectacular result Michael.

A beautiful set of heavenly bodies. Excellent work on both.

A fantastic image of the eclipse and the red planet! When I was out very early it was wonderful seeing the full moon and Mars.

@Elaine Hancock: Yes, it is enjoyable. Thank you, Elaine.