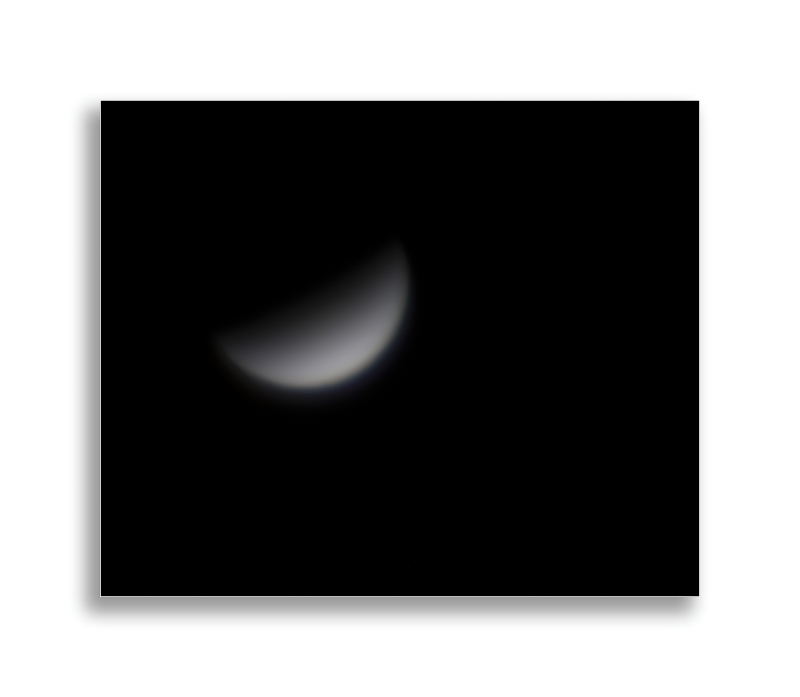 Not Our Moon (but Venus)

Posted by Michael Skorulski (Toronto, Canada) on 17 October 2015 in Plant & Nature and Portfolio.

This may look like an image of our moon but its actually a photo of Venus taken from the driveway of my house in Saudi Arabia. Venus has phases like our moon but surface detail is obscured by a constant thick cloud cover.

Venus is the hottest planet in the solar system. Although Venus is not the planet closest to the sun, its dense atmosphere traps heat in a runaway version of the greenhouse effect that warms Earth. As a result, temperatures on Venus reach 870 degrees Fahrenheit (465 degrees Celsius), more than hot enough to melt lead. Probes that scientists have landed there have survived only a few hours before being destroyed.

Venus has a hellish atmosphere as well, consisting mainly of carbon dioxide with clouds of sulfuric acid, and scientists have only detected trace amounts of water in the atmosphere. The atmosphere is heavier than that of any other planet, leading to a surface pressure 90 times that of Earth.

At the moment, Venus is a very bright light in the eastern pre-dawn sky in the northern hemisphere. Below it are Mars and Jupiter. Just look east at about 4 or 5 in the morning and you'll see these shimmering beauties, part of the spectacular universe into which we were born.

Fantastic! Very well documented as well, thank you. Great addition for the Am3 Discover section! Thanks Michael.

Fantastic capture of this hot planet ... and for your added documentation, Michael.

This image has been featured in 1 Remix collection.