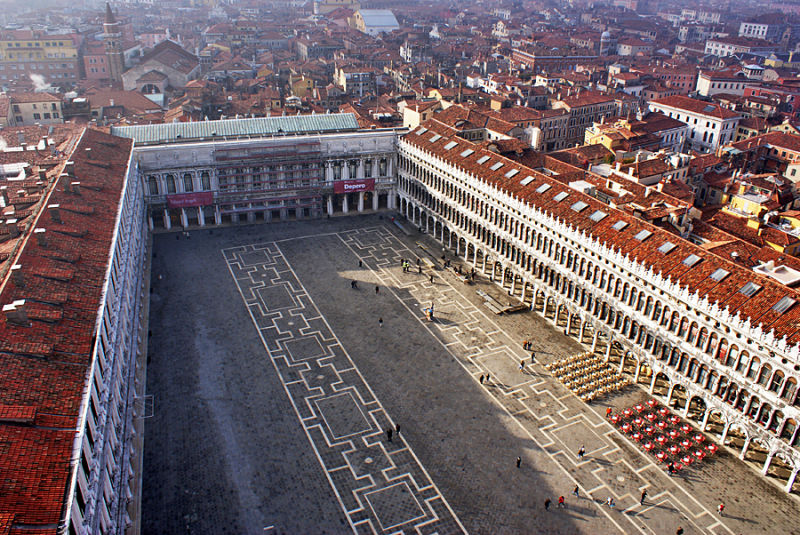 "The drawing room of Europe"

Posted by Michael Skorulski (Toronto, Canada) on 11 December 2008 in Cityscape & Urban and Portfolio.

That's what Napoleon famously called St. Mark's Square in Venice, Italy. I went there expecting immense flooding but as you can see it was bone dry.
Here's a story I wrote about my trip entitled, Have Boots Will Travel:

Carry an umbrella and it's bound to be sunny. Take rubber boots to Venice and it's sure to be dry.

In December 2001, I went to Venice bootless. The notorious Aqua Alta or high water inundated the city. Vaporettto stations were under water so I couldn't take the water bus from my hotel to the train station. I followed the traditional raised walkways for part of the route. But inevitably, I had to step off and the water sloshed over the top of my shoes or seeped through the "waterproof" leather.

Finally, I took off my footwear and waded through the streets barefoot. It was a fun and childish thing to do. An older Venetian lady scolded me for risking my health in the freezing Adriatic. At the train station, I put my soggy shoes back on and watched Venetians arrive carrying rubber boots which they quickly donned.

I vow to come prepared the next time I hit Venice in winter. I buy a pair of rubber yachting boots a foot high.

Hours before I get on the plane for Venice on Tuesday, December 2, my friend, Luke, rings. According to The Daily Beast internet reports, Venice was experiencing its fourth highest flood in contemporary history, 153 cm. above normal. In 1966, flooding was a record 190 cm.

Mayor Massimo Cacciari is telling residents to stay indoors and warning tourists not to come to the city, he says.

"The water's so deep, you can swim across St. Mark's Square," he cautions. Suddenly my preparations seem inadequate. I will need hip waders or an inflatable kayak for this trip. I picture myself dressed in a wetsuit fording narrow alleys searching for a washed-out hotel, my bag held over my head army-style.

I go anyway. At Venice's Marco Polo Airport, I buy a three-day transportation pass for 31 Euros. I ask the information lady, if I'll need to put on my boots. Venice is now dry as normal, she says.

"You would have needed high boots for fishing on Monday," says Sandro, owner of the Hotel Al Ponte Mocenigo near San Stae vaporetto stop. "We're on one of the highest points of Venice so it didn't quite get into the hotel. But we were watching the level closely. Just a few cm. more and it would have been inside." He attributes the ultra high water to a combination of the moon, rain and a strong wind from the southwest which drove the Adriatic into the city.

He says the Moses Project, a $5.5-billion system of offshore dams to protect the city won't be finished until 2011.

A day after the flooding, Sandro was still dealing with cancellations caused by news stories.

The Ca Dei Dogi Hotel nearer to St. Mark's Square switched on its pumps when the water got 15 cm. deep on the first floor.

"We were lucky we could deal with the water," says owner, Suzanna. "But we'll still have to replace some of the wooden doors damaged by the water." She tells me a local shoe store wasn't so fortunate. Stocks of footwear were completely destroyed by the water and the owner was forced to close.

She says that several guests at the hotel had to walk through the flooded streets to catch road transportation at the Piazzale Roma because vaporettos couldn't get under the bridges due to the high water.

"We bought boots for the guests and they walked," she says. "It's a long way but they wanted to do it." She says that at the height of the flooding even the raised wooden walkways were useless because they just floated away.

She agrees that if you come to Venice in winter it's best to be prepared and bring along boots.

I brought an umbrella too. And it looks like it will get some use. It's starting to pour.

Amazing story. The romance of Venice is tampered by the unpredictability, I guess.

Amazing and fantastic!!!!!
Very nice Micheal.
Ik hope you gifs us a lot of story's
I like traveling story's :))

Great story and and and interesting angle of this quite famous (and more recently) much in the news landmark. Excellent shot - You are lucky to find this dry.

This is an enormously powerful image - magical.

Fantastic! The photo and the story!

@Betty: Thanks so much, Betty.

thanks for that little visit to italy... my husband went there when he was young and said the water ways smelled like poop coz people threw everything in there, i guess it's not that way anymore or you wouldn't have taken off your shoes lol grand picture man!

@Elaine-: Thanks, Elaine. I would probably take my shoes off irregardless. I've only been in winter, perhaps not the most odoriferous season.

Nice view from above of this magnificent square.

Lovely view of the square
You almost seem too high
Excellent combination of personal experience and reportage too.

Great story and photo! Italian winters can get really wet, I remember getting washed in Rome many times a day. :-)

Amazing picture! You must have been high to take it!

@Elena Kotrotsou: Thanks, Elena. Yes, I was in a bell tower.

Great image and very interesting account of your adventure.

@Steve Rice: Many Thanks, Steve.

This is wonderful, Michael ... both your shot from the bell tower AND your writing. Thank you for taking me to a place I've never been, a remarkable city. I love your writing, especially the Wild Thyme piece ... others need to go to your 'about' and see other things you've written!

I'm amazed by how the great photographers of AM3 are also superb writers and story tellers, bravo Michael ;)

Denis from A giant black hole filled with lights, Tokelau

Nice picture.
I love Venice
I regularly go to Venice, at least twice a year, and I manage with the high waters as the Venetians do. Of course you have to be prepared, but these high waters are barely redictable, and usually last the time of a tide: a few hours. You just have to change yours plans. Venice is such a nice city that you can do this for her.
And you'll love Moses when it will be finished. It is such a huge project.... I can barely imagine that it will work. But I wait to see

@Denis: I saw some of the Moses project from a boat and it is massive.

Well done shot, I was just there couple of months ago but did not climb the tower :(

@Tyson Williams: Photography wise, climbing that tower was the best thing I did in Venice. Many thanks.

@Pradeep: Many thanks, Pradeep.

Marion from Nanaimo, BC, Canada

Wonderful story and picture Michael, but when I look at it I just want to play hop scotch. Must be the little girl in me coming out.

An unusual shot of the Doges city… And a beautiful one !

What an awesome view!! I like the pattern and the story too.. I hope to go to Italy one day.. :)

I have been there, but at the first glance I was feeling pitty for myself that where is this wonderful city or area which I have never been there... It's wonderful esp. in this image, nights and day... one of the most lovely place in the world, thanks for sharing this image...

Its beautiful! Love all the red tile roofs.

One from Açores, Portugal

That's a spectacular view. What a great shot.

A wonderful story - love all these Venetian images - they are so interesting and really well taken Long time no see - sorry! Was just checking out the links on my website to see if all were working properly. When I saw your link I just had to come and look - b eautiful!