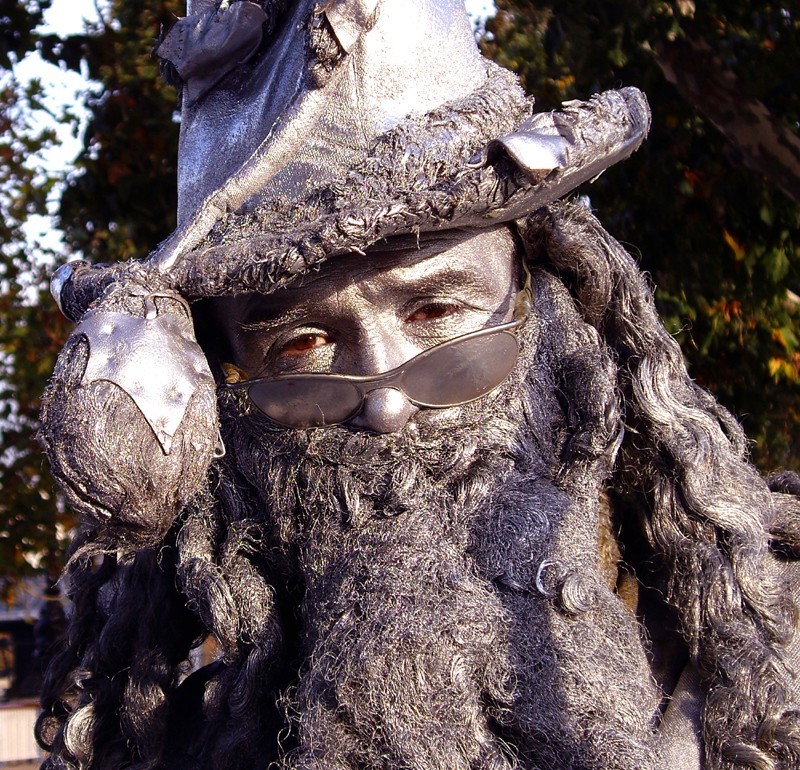 The wizard - A London statue man

Posted by Michael Skorulski (Toronto, Canada) on 2 March 2008 in People & Portrait and Portfolio.

The first in an 8-photo series:

Like a shimmering sculpture chiseled from a block of ice, the statue man perches perfectly still on his box as I approach. From the bauble on his cap to the points of his slippers, silver spray paint coats his apparel. On this tranquil morning on London's Thames River embankment, no one else is around. I'm not sure whether or not to break the silent, frozen spell. But I do. I ask a question.

"Who are you?" I whisper, reluctant to disturb his performance.

"Dat's vot I said, da vizerd." He has a beaky intellectual look like a bearded Bulgarian chess player I used to watch beat all comers in the parks and streets of Toronto. But the wizard's watery brown eyes are sad, lonely bloodshot. They speak of solitary nights in small rooms with large bottles, possibly wondering why he's left his home to become a statue man in London. Peering into those doleful eyes, I feel his pain, which is also my own. Immense pity seeps to the surface. Before tears gush, I drop a pound into his box, snap a photo and stride on. I will try to see him later. I marvel at how chance encounters can possess unexpected emotional significance.

mmm, I don't know whats going on in this great world !!!
thanks for pic and info :)

You are right, Michael. His eyes look blood-shot and very sad. I wonder what keeps this man alive.

@givethemhell: That is an answer I never found out. Thank you, Eva.

His eyes really do look very tired. :( That was first thing I noticed.

great portrait. It looks like he is smiling, is he?
I lived in London for several years, this brings back a few memories of the 'statues' around Covent Garden.

@Rhys: I don't really think he's smiling. He appeared too weak and dejected. Thanks, Rhys.

the eyes are full of sadness :(

Very sad eyes indeed...looking forward for the next ones ;)

Fantastic! You've captured him so well. I wonder if he's related to the Wizard of Christchurch?

@martie: Perhaps. I didn't know there was one. Thank you, Martie.

Excellent, love the story too!
The light was just perfect - no shadows on the face, well done!

Great shot and wonderful story, Michael. You are a master of your craft(s)!

@Betty: Thank you, Betty. I appreciate that.

Well done, and another thoughtful text!

@vu@granby - Wolfgang Prigge: Thank you, Wolfgang. I appreciate your view.

His thoughts, his feelings are his own, and I'm grateful that he was willing to share, it's hard to share pain, your photo is exceptional, and I'm very impressed that he let you take his photo :)

Wonderful Wonderful Capture and Commentary...thank you for sharing!

@Jen: A pleasure. thanks, Jen.

What interesting prose to go along with the interesting capture! It's quite coincidental that I was debating whether to post a similar photo I snapped in Chicago. Thanks for sharing!

@Steven: Thanks, Steven. It would be interesting to see the photo you mention.

Very Good, unique. what is this? Sculpture or Original

@Irwansyah Sk3tchw!nd: This is a person who stands like a sculpture to earn money. Thank you.

He does have incredibly sad eyes. Nice shot.

hi michael it was alittle of all i am actually getting ready to do some nudes and i was playing with lighting so i came up with the idea to do a series of self expression i was very proud of the one photo because it was exactly how i had it pictured in my mind. i do hope all enjoyed this is an increadiable shot btw

@michelle: Thanks, Michelle. I'm sure we'll all enjoy your further adventures.

Very nice picture, I love the colours,
hard to think it is a person.

What a sadness in his eyes! Thanks for sharing the story.

Incredible story with great prose that emotes all that was in your heart. Wonderful image to accompany it, Michael!!

your narration touched me to tears.You are a great writer,Sir!And wonderful and soulful image of course:)

It's a nice shot..
his eyes look so tired, on the other hand, sad... hmmm mixed feelings.

touching both the picture and your insight... his eyes drew me in. M.E. can't wait for more.

Well, the silvery statues are all over the world...it seems....Even in Tokyo! It's another way of making a living in an overpopulated world! It must be terrible to have to stand in one position for hours on end!
The shot is excellent and very touching!

@Japanalia: Thank you, Gabriela. Yes, he is trying to make a living as best he can. Thank you for the insightful comment.

very touching! the photo is superb...

Harald from Frankfurt am Main, Germany

nice story. and i love his sunglasses:)

@gandz: Thanks, Gandz. I'm not sure he can see out of his glasses very well.

such a good photo!! i want to learn!